This blogpost contains the solutions for Narnia series of challenges from overthewire, this category of challenges are aimed at beginners to binary exploitation.

Let’s take a look at the code of this program.The below C code is the source code for the first challenge in the Narnia series of challenges from Overthewire. 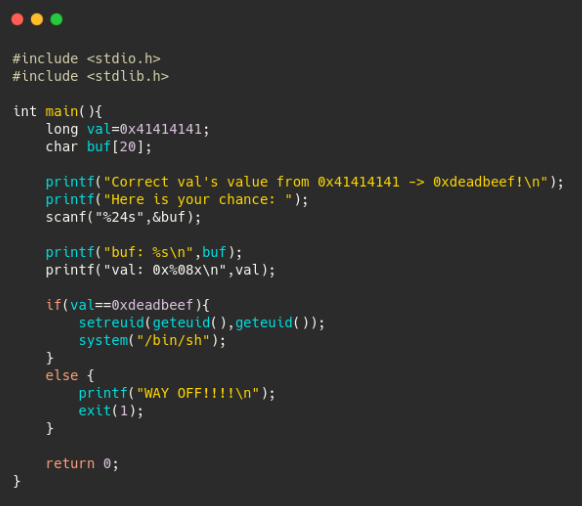 From the code it’s clear we need to give val the value of 0xdeadbeef to get a shell as narnia1 user. By observing the code we can spot the issue from scanf() function. The scanf() is used to get the input for buffer buff. and this function have no bound checkings on input, buf variable is 20 bytes long but the scanf() reads in 24 bytes hence we can overwrite the variable “val” with any value we like.

Our target binary is an ELF 32-bit binary.ELF is Executable Linkable Format which consists of a symbol look-ups and relocatable table, that is, it can be loaded at any memory address by the kernel.

Let’s send some crafted input to the program and monitor

Pwned! Nice and simple bufferoverflow challenge .Next challenge is Narnia1.